The analysis, which is based on data from a survey that Pew conducted last year, found that nearly six-in-ten black Americans favor legalizing cannabis for both medical and recreational purposes, while an additional 28 percent said only medical cannabis should be legal.

Only 11 percent of black respondents said that marijuana should remain completely criminalized.

Asked whether people should be released from prison and have their records expunged for cannabis-only offenses, 74 percent of black Americans said in separate questions that both of those policies should be enacted.

While black support for marijuana reform is largely consistent with support from the general public, the race-specific analysis is especially important in context, as black Americans are significantly more likely to be arrested and prosecuted over cannabis even though studies have found that white people are even more likely to use illicit drugs.

Similar shares of Black Democrats and Black Republicans say marijuana use should be legal (88% and 85%, respectively), though views differ somewhat on the type of legalization. https://t.co/Qg4pZGcLet pic.twitter.com/DpKwhcao8j

Black men are more favorable toward adult-use and medical legalization at 61 percent, compared to 55 percent of black women.

Regardless of opinions about legalization, there’s strong support across the board for social equity policies such as releasing people from incarceration over marijuana and allowing their records to be sealed. 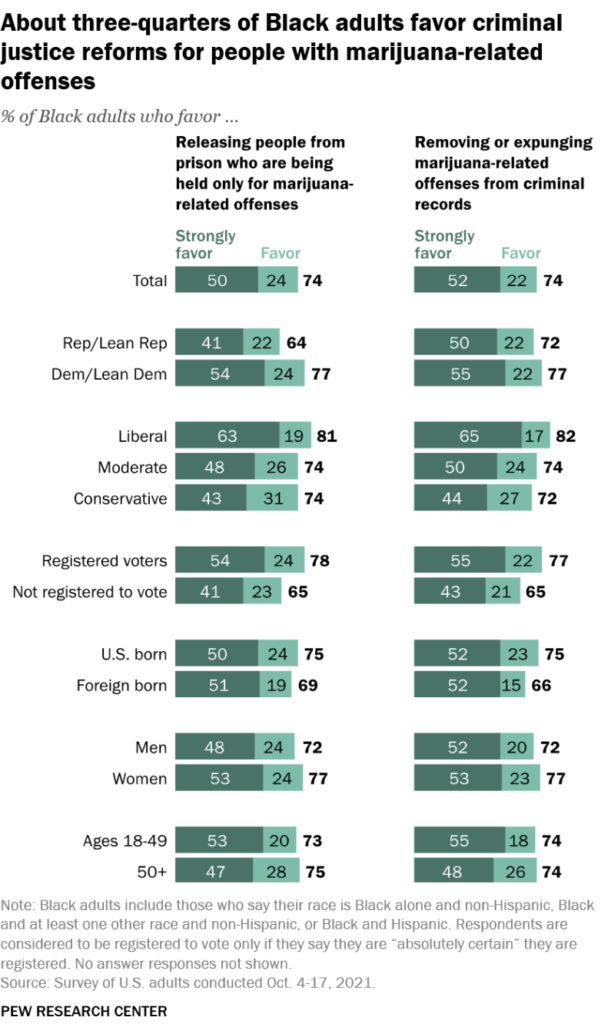 As noted in a recent interim report from a California government task force, the racially disparate enforcement of marijuana laws has exacerbated systemic issues in minority communities, including challenges with housing access, job placement, loss of public benefits eligibility and more.

The market research firm SSRS found that 69 percent of Americans back adult-use legalization, while a whopping 92 percent back legalizing cannabis for medical use.

With respect to adult-use legalization, 78 percent of Democrats, 74 percent of independents and 54 percent of Republicans said they favor the policy change.

Meanwhile, a separate poll released by the cannabis company Jushi Holdings found that 61 percent of adults 21 and older would be more likely to support a political candidate if they support legalization.

That includes 33 percent of Democrats, 25 percent of Republicans, 24 percent of independents and 13 percent of those without a political affiliation.

Another recent poll found that a strong majority of Americans, including most Republicans, support drug decriminalization. There’s also majority support overall for allowing the operation of overdose prevention centers where people can use illicit substances in a medically supervised setting and receive treatment resources.