The Benefits Of Having A Medical Marijuana Card

The Benefits Of Having A Medical Marijuana Card

Today, more and more states have legalized the use of medical marijuana to treat chronic pains and other conditions. And with this move, consumers are encouraged to get their medical marijuana cards (MMJ). An MMJ card is essentially an identification card issued by the state that allows the patient to own and possess medical marijuana with the advice and recommendation of a physician.

If you’re interested in getting a medical marijuana card, here are some of the notable benefits of owning one.

When you have a medical marijuana card, you can be entitled to lower costs all year and even get lower-priced products compared to what you generally get from dispensaries. Once marijuana became legalized for recreational use, taxes have also increased, which means regular users without the card could be spending more money on it.

In general, standard taxes apply to medical marijuana. And in some cases, some states have exempted its taxation. With this in mind, you can save thousands of dollars by getting a medical marijuana card, especially if you often purchase cannabis products for medicinal purposes. You can check out legitimate sources such as Rethink-RX to help you with the process of getting a doctor’s recommendation and applying for an MMJ card.

Cannabis is federally illegal, and there are regulations on marijuana usage even if recreational marijuana is legal in your state. And as such, getting an MMJ card can give you an added layer of protection from possible liability for possessing one, especially since the rules can get confusing.

Generally, legal restrictions are putting a limit on how much marijuana users can buy for recreation use. On the other hand, medical marijuana cardholders don’t have that limit. The rules generally vary from one state to another, with only some allowing the use of marijuana for medical purposes, and that includes growing your own plants.

With a medical marijuana card, you’re allowed to grow cannabis in these states, but are not limited to the following: 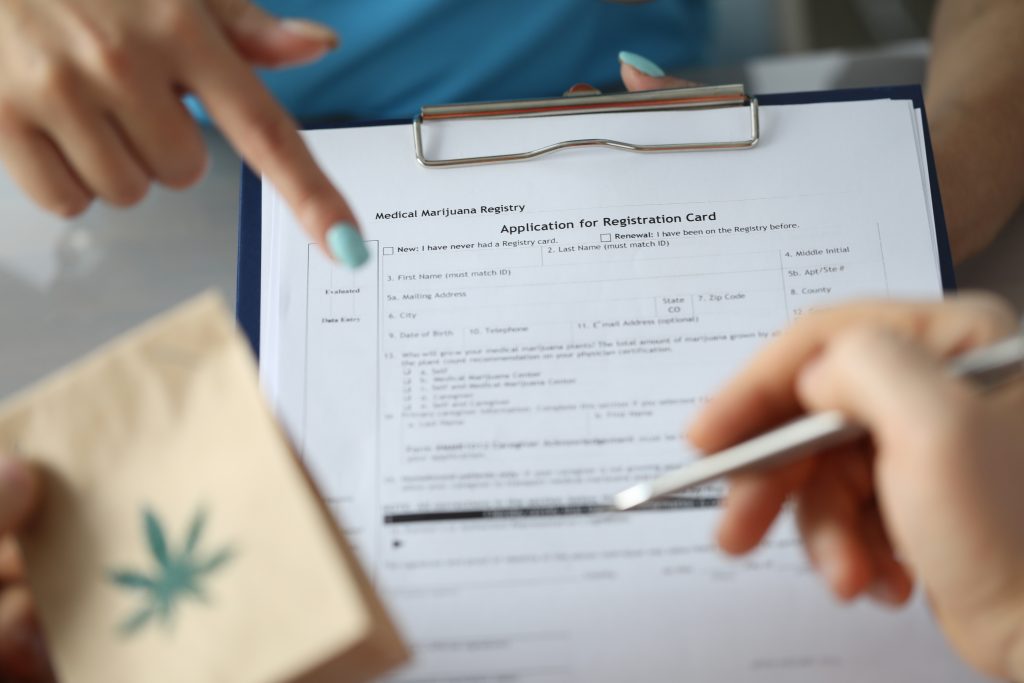 Focus on female hand holding paper folder and pointing for text. Sick patient with paper package with cannabis symbol on it and signing document. Healthcare and medical marijuana concept

In addition, when you have an MMJ card, you are allowed to bring more quantities of marijuana home. However, the quantity allowed for purchase also varies by state. And while the laws are already passed, they are still changing and are still identifying how to make licensed cannabis available to patients.

Also, if you’re a cannabis plant grower, the MMJ card excuses you to grow more numbers of plants at home, unlike recreational users.

The states allowing users to grow marijuana are reserved for seedlings and mature plants. In Washington state, for instance, cardholders can grow up to six cannabis plants for personal use. There is an exception, though, because healthcare practitioners from the same state can authorize up to 15 plants. They can also allow cardholders possession of up to 16 ounces of marijuana from the plants if necessary.

Regulations on medical marijuana have many marijuana dispensaries subjecting their products to further testing and verification than they would for recreational usage. These sources usually keep a supply of marijuana products with combinations of strength, potency, and different ratios of CBD. And so, owning an MMJ card can allow you access to a range of stronger strains compared to recreational cannabis.

The reason behind this is due to the varying level of potency a patient needs to help them relieve their symptoms and chronic pain. And so, owning a card can be beneficial- you can get better strains of medical marijuana products and save money in the process.

With all that in mind, get yourself a card and contact your favorite dispensary to inquire about the strains they’re offering.

Aside from having access to more effective strains, a medical marijuana card can also allow you to purchase greater quantities of cannabis products.

In the state of Massachusetts, for instance. Users have to get used to the purchasing limits. They also don’t have as much access to edibles, flowers in higher milligrams, and other related products. But because of the medical marijuana card, patients do have access to them. The card entitles holders to greater quantities and higher doses. For patients with varying diseases and needs, a card can bring them much relief in these cases.

If you’re in a state where recreational marijuana is allowed, they are only available to those who are 21 years and above. But when you have a medical marijuana card, you can get access to medical cannabis even if you’re only 18 years old (with assistance from a caregiver) and have medical conditions that qualify you to do so.

A medical marijuana card comes with a perk only available to cardholders, even in states where non-card owners can freely attain recreational marijuana. For instance, the card can give patients better access to professional support and a vast range of products and strains. This means that you can get quality marijuana strains from any medical dispensary.

Also, there are many types of products, and they usually come with varying properties. And as such, it can be easy to get confused and overwhelmed about which product is the right one for you. A medical marijuana card can give you access to medical professionals or coaches who can give you proper guidance and advice.

Being a medical marijuana cardholder comes with a lot of benefits. It can give you access to lower costs, cleaner and more effective strains, and cannabis dispensaries. It can also give you legal protection. Overall, one can truly benefit from owning an MMJ card.

With that in mind, acquire your physician’s certification and get your card application started.

What Are CBD Dog Treats? How Do They Differ From Tincture?